August 9, 1958 Randal Fawkes was arrested for sedition and accused of making a seditious speech during a union meeting on Windsor Park. This entire incident stemmed from activities which occurred during a visit to the Bahamas Lumber Company, Mastic Point, Andros by Randal Fawkes and L. Garth Wright. These gentlemen were there at the invitation of labourers who were happy to see them and receive words of encouragement. 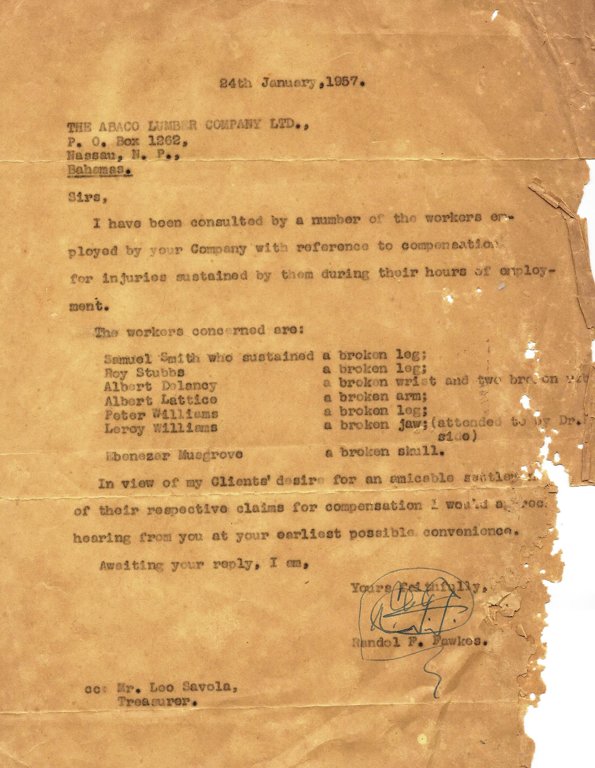 Conditions at the camp were terrible. Fawkes and Wright witnessed persons with broken or sawed off bleeding limbs. They also worked long hours for very low wages. Workers also suffered the indignity of the Truck and Tommy Shop System where they received things like food, drink, rent and tools from the boss’ Commissary Shop rather than actual wages. This was a little more than slavery, and just another tool used to exploit workers and keep them under the bondage of their oppressors. Further, the lumber camp was loud and filthy with mounds of sawdust everywhere and toilets in the centre of the yard. There was no clean living area for the families of the workers so they had to endure constant noise and filth consequently, the children were often sick.  A meeting was organized and the union activist spoke out against the obvious exploitation which angered the boss, Mr. William N. Russell. He then demanded that they leave, when they did not, he stormed out of the meeting vowing to get them, and he was true to his word. Firstly, a few days later, Richard Horton, a worker who befriended the activist, was fired and asked to vacate the property by 6:00p.m. or face prosecution for trespassing, he had  no choice but to leave. This however, was not the end, but the beginning of a showdown between Mr. Fawkes and his adversaries.

When he returned to Nassau, Mr. Fawkes was charged with trespassing and disorderly behavior in relation to his activities at the lumber camp. Magistrate Maxwell Thompson gave him a suspended sentence and he was bound to keep the peace for 3 years which meant that he could not hold any labour meetings, picket or involve himself with labour organizing or activism. In response, Mr. Fawkes did the unthinkable; he held a monster meeting at Windsor Park and spoke vehemently against colonialism and the minority government, the following day he was arrested for sedition. When asked to make a statement, Mr. Fawkes wrote, “The Bahamas Government is the most corrupt system I have ever seen in my life”. The paper was then snatched from his hand because this was obviously not the statement they wanted. He was then formally charged but was granted bail on the condition that he held no more mass meetings and or demonstrations. Brother Fawkes was then released to the triumphant shout of the masses that walked to the Bahamas Federation of Labour (BFofL) Office on Wulff Rd. where a mass prayer meeting was planned. 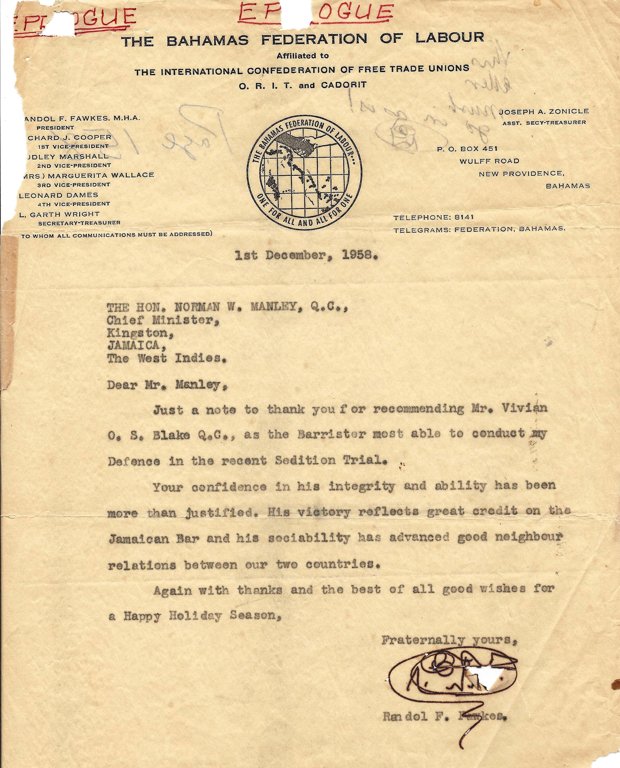 Mr. Fawkes then began executing the plan for his defense appealing to Premier Norman Manley of Jamaica because he was not on good terms with the Bar Association. Mr. L. Garth Wright was also dispatched to New York to ask the comrades overseas to apply pressure by keeping the sedition case before the world press. Unfortunately, on the eve of the trail some of the members of the BFofL broke ranks and formed the Bahamas Trade Union Congress and L. O. Pindling, Milo Butler and Clarence Bain went abroad until the trail was over. Fawkes was also tortured by the press, called profane names by the UBP and the PLP labeled him a nut.  The ordinary workers remained steadfast contributing to the Fawkes Freedom Defense Fund.

This was indeed, the trail of the century, with His Lordship, the Chief Justice Sir Guy Henderson, Edward P. St. George Acting Solicitor General and Vivian O. S. Blake, the youngest Queen’s Counsel in the British Empire as representative for the defense. The entire jury, with the exception of one black juror was white; the odds were clearly stacked against Mr. Fawkes. Mr. St. George was sure of his victory but, young Mr. Blake was up to the challenge and this resulted in a shocking turn of events.

Before the crown could prosecute Mr. Fawkes for Sedition, Mr. Blake challenged whether his actions on the night in question met the definition of sedition, placing the Crown’s case in a precarious position. Mr. St. George began his case confidently, but the strong and logical argument of Mr. Blake created a huge stumbling block, and he (Mr. St. George ) not only stumbled  to argue his case, but to maintain his composure. Mr. Fawkes however, had no fear, when the case was adjourned for his Lordship to consider Mr. Blake’s argument, the BFoL poured concrete for the House of Labour. 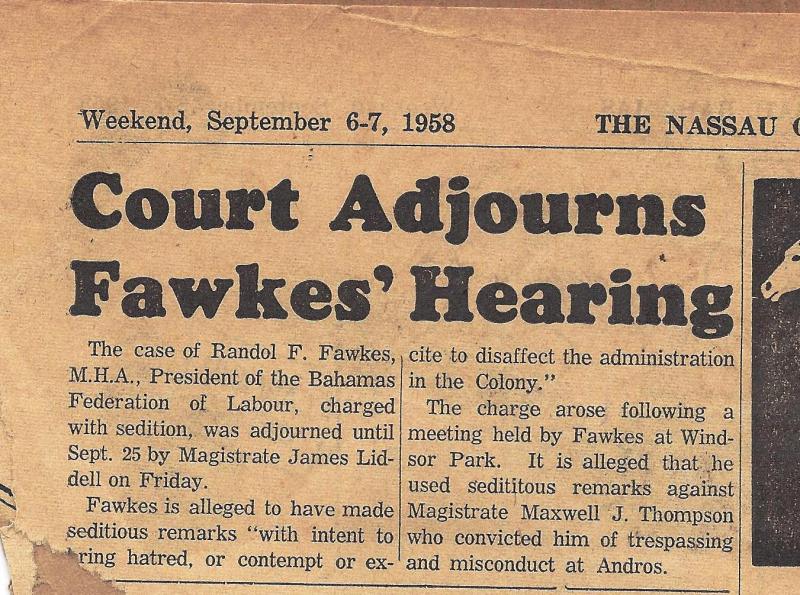 When the case resumed, the court was packed with many refusing to work until the verdict was read and they were not to be disappointed, the Chief Justice verdict was that Mr. Fawkes had no case to answer. It was not the verdict the oppressors had expected but, one met with jubilation at the meeting at Windsor Park that night. Mr. Blake was received with a thunderous applause and urged the brothers and sisters not to harbour malice or hatred as it would impede the march to freedom. When Brother Fawkes spoke he was grateful and appreciative of the support he received from the common working man throughout his case. He then turned his sights towards a new battle, one for the security of employment for all, he promised to build Jerusalem. This was a generation ago, and today as I look out I tragically see no Jerusalem. New enemies have arisen from those who were once comrades, our people seem unsure of themselves and activism and unionism have become dirty words. Unions who were once strong and powerful, standing steadfast against our oppressors, have lost their thunder. The common working man who stood shoulder to shoulder with their labour leaders shutting down the country for 19 days during the General Strike are unable to demand the rights their forefathers fought for. The fire that ignited the Burma Road Riots is no more;   we Bahamians have seemingly become prisoners of our own collective apathy and complacency, a shadow of the courageous people that existed a generation ago. The question I have is, if Randal Fawkes was our Moses, who will be our Joshua?

If you wish to learn more about Sir Randol Fawkes, The Father of Labour, please visit www.sirrandolfawkes.com,   I also encourage you to read The Faith That Moved The Mountain by Sir Randol Fawkes.